There’s been a major twist in the case of a teacher accused of having sex with an underage student.

A Sydney high school teacher has pleaded guilty to three counts of aggravated sexual intercourse with a 14-year-old after her barrister told a court she wanted to put the boy “out of his misery” as soon as possible.

Monica Elizabeth Young, 24, was due to stand trial in September over allegations she repeatedly sexually assaulted a male student in June and July 2020.

She entered a not guilty plea to 12 charges on February 8. 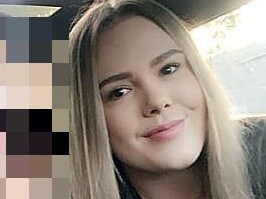 But on Tuesday at the Downing Centre District Court Ms Young pleaded guilty to three counts on an altered indictment.

She replied “Guilty, your honour” three times as the charges of aggravated sexual intercourse with a child aged 14 were read out.

The charges were aggravated due to the child being under her authority at the time, the court heard.

She will remain on bail until her sentence hearing, where prosecutor Alexander Terracini said he would argue prison time is “the only option” for Ms Young.

Mr Terracini said the Crown had spoken to police and the victim and concluded the sentencing process would be more efficient if the 24-year-old was not in custody. She admitted to three aggravated counts of having sex with a child aged 14. Picture: FacebookSource:Supplied

Ms Young’s high-profile barrister Margaret Cunneen SC told the court Ms Young would have psychiatric and psychological reports prepared before she is sentenced.

“I expect there may be some treatment regimes that hopefully Ms Young might be able to enter into before the inevitable,” she said.

The unexpected plea happened on the same morning Ms Young’s teenage victim was due to pre-record his evidence ahead of the trial in September. Prosecutors will argue prison time is the ‘only option’ for Ms Young (right) when she is sentenced in June. Picture: NCA NewsWire/Joel CarrettSource:News Corp Australia

On Monday, Ms Cunneen told District Court Judge Kate Traill she had approached the Director of Public Prosecutions last week about Ms Young pleading guilty to some charges, but had not heard back.

“My client was very anxious to avoid the situation where (the boy) had to endure another weekend of concern about having to do this,” she said.

“Because of the time taken to make this decision, that has occurred.”

“They were certainly my instructions from Ms Young, to put him out of his misery, as it were, as soon as possible.” Mr Terracini replied he would do his best to get a speedy answer from those upstairs.

By Tuesday morning the matter had been resolved and a fresh indictment was handed up to Judge Traill.

Mr Terracini also handed up three documents relating to other offences that will be taken into account when Ms Young is sentenced, but will not result in a conviction.

Ms Young will be sentenced on June 24.