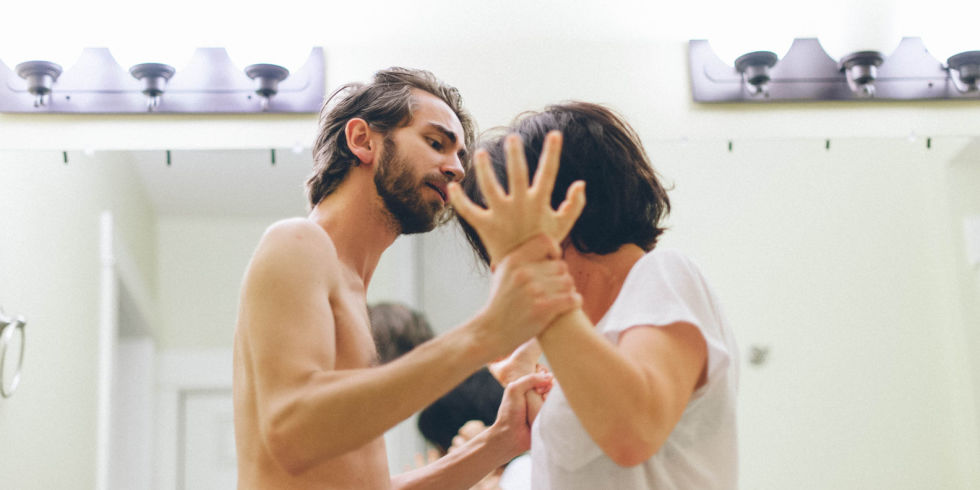 I REMEMBER THE FIRST TIME I GOT punched by a girlfriend. It was during a fight on a New York City street corner, over a subject I’ve long since forgotten. But the punch — thrown as I leaned in to make a point, thrown reflexively, out of unchecked rage — stayed with me. It didn’t hurt that much, tagging me just below the left ear. But it caused serious damage.

I didn’t hit back, cry, or scream “You monster!” But my reaction was probably not what she might have hoped for. It was not: a) She must be really angry!, b) How could I have been so insensitive?, or c) What a feisty woman I have!, but, sadly, d) This bitch crazy. And by the next morning, our future had clouded over.

According to a Penn professor who studies these things, every American man has about a 28 percent chance of being struck by a woman at some point in his life (in related news, the number of girls ages 10 to 17 arrested for aggravated assault has doubled in the last 20 years). And yet no one seems to take the phenomenon that seriously. Maybe it’s because men, generally speaking, are bigger and stronger, and we assume there’s a real limit to the physical damage women could actually inflict. We don’t picture these scuffles resulting in bloody noses and black eyes or a trip to the station house. Furthermore, pop culture has made the idea of a pretty girl whaling on a guy a wacky comedy staple — Angelina Jolie smashing wine bottles over Brad Pitt’s head in Mr. & Mrs. Smith and Cameron Diaz coldcocking Edward Burns in The Holiday were both played for laughs. But the reality of getting hit by your girlfriend isn’t so sexy or hilarious.

A male friend of mine — let’s call him Tom — was hit several times by his. “We’d get into these exhausting fights,” he tells me. “Like, 10 p.m. to 6 a.m., where nothing would turn the volume down except sex and sleep. With her, everything was fine in the morning, but I was upset for days. She actually seemed to think it was sexy. I remember her showing me finger-shaped bruises on her arms where I had restrained her from swinging at me — and she raised an eyebrow, made a saucy comment. But I was petrified. I was doing stuff like putting the knives up on the very top shelf. For me, it wasn’t fun at all.”

I’ve gleaned similar tales from other male friends, most of them told sheepishly, most of them prompting the same question from women: “Well, what’d he do?” While I’m tempted to flip the genders and then see how the question plays, I have to admit that I, at least, was far from a battered innocent. In one case, I said something cruelly dismissive about a project that Ann (let’s call her) was working on. I was an asshole, putting down her ambitions. But the punch was more than I deserved. In another case, I said that I really needed to work this one night, needed to be left alone, and if Rachel (let’s call her) couldn’t respect this, maybe she and I weren’t right for each other. After some increasingly angry exchanges, I turned my head and caught a clog in the facial region known as the supraorbital ridge. It was a get-out-of-jail-free card — my own jerkdom had been eclipsed — but I was also headed out the door.

Maybe it’s a postfeminist thing. Dressing to kill, bringing home the bacon, kicking ass in the workplace — the nascent alpha female may have a dark side, a culturally abetted idea that it’s more or less okay to hit the less physically vulnerable member of the relationship. “I remember [my girlfriend] talking about hitting her ex,” Tom recalls. “And she seemed almost proud of it — talking about how it drew blood.”

But what, really, does it feel like for the guy? First, there’s the shock of betrayal and a palpable urge to hit back. Second, there’s outrage at the presumption that this won’t happen. This is all perceived through a haze of humiliation at the fact that, yes, you got hit by a girl — and it hurt. “It didn’t have that giant feeling that a woman would feel being hit,” recalls another male friend (let’s call him Bill), who has also caught some blows from an ex. “It felt like it should seem funny, but it wasn’t funny at all. I had no context to understand it. I can’t think of anybody I knew who I would even talk about it with.”

The experience tends to bring some deep-tissue change to the relationship. “The second time [she hit me], I started to feel threatened by what she could potentially do,” says Tom. “Not just physically but emotionally. I started not trusting her.” Bill had a similar reaction. “It was definitely a turning point, where I felt this person is over the edge in a way that came through viscerally. It made me more angry at her than I’ve ever been at anybody.”

I know I played a role in escalating things to the physical. Like many nice boys, I was discouraged from showing strong emotions at home, lessons I’m convinced helped me get myself smacked. If a girlfriend were angry at me, instead of yelling back, I’d do what I mistook to be the “mature” thing and keep quiet, answering in calm (that is, condescending) tones. After shooting my pissy little barb at Rachel, for instance, I coldly kept on working at my laptop like nothing happened. Rachel called me out; I shrugged her off. She got louder; I got quieter. In the end, she threw something at me because she needed a response, needed to know she wasn’t alone in the emotional tempest roiling in our apartment. I got her point, but at a dire cost. We were done in three months.

In this, I’m like my sister, who is a survivor of both a physically abusive relationship and medical school. Sharing my repressed Irish-Catholic background and romantic travails, she has diagnosed us as stone-faced, hypo-Asperger nonreactors. We may be pissed, hurt, or scared, but we’re not going to perform it for you. And if you throw a punch, we’re going to leave you. Maybe not immediately, but soon.

A guy’s initial response to female rage is often confusion. Almost every time I’ve been subject to a real fit, it’s taken me several seconds to realize that the hopping, screaming Rumpelstiltskin before me was not kidding. She actually was this mad. Punches or kicks brought the same perplexity coupled with a more primal anxiety that doomed the whole thing.

I know I like fiery women and that I may make a more tempting target than some (although I’m peaceably married now). I’d like to be able to react in moments of conflict, to show intimate emotions to intimates. But after Ann punched me, some part of me knew that I was never going to do it with her. And this girl was beautiful, hilarious, creative, sexy — my version of Miss Right. We might have worked everything out and been happy. Instead, we were done within a year of the first punch.

In the end, the best reason not to hit your guy is also the most empowering: You don’t have to. You can hurt us way worse with a withering glance and some choice words. Or by banishing us to the couch, where we sometimes belong.