A man, whose ex-girlfriend left him with life threatening injuries, has spoken for the first time about the domestic violence he suffered.

Mark Kirkpatrick was found on a street in Lancashire seven months ago after his former partner Gemma Hollings attacked him with a pole, hammer and a glass bottle.

Mark still bears the scars – on his face and body – of the attack which Lancashire police described as one of the worst cases of domestic violence they’d ever seen.

Hollings was jailed for eight years in October.

Speaking softly he says he met her four months earlier.

“She was alright in the first few weeks. I thought it was a passing thing when she became controlling.

“She started telling me not to wear shorts. She wouldn’t let me have my hair shaved even though that’s how it was when she first met me.

“It got violent about three or four weeks into living at hers. We argued over something.

“I got up to leave the house, she pushed me back on the stairs and put her hands round my throat. She tried to strangle me.”

The controlling and violence continued until one evening on Friday 2 May 2014 when things took a turn for the worse.

“She wanted some money. I rang my mum, she refused.

“And then she [Gemma] got violent. 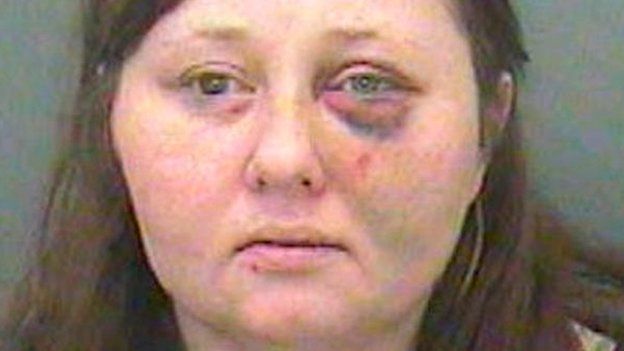 Image caption Gemma Hollings was jailed for eight years for the attack on Mark. Hollings’ injury in this image was unrelated to the case, according to police who issued it.

“She pushed me against the wall, squeezed my testicles, she picked up a metal pole hit me all over the body.

“Then she picked up a hammer hit me in the head and all over the body. She picked up a penknife and sliced me in various places.”

Mark says he didn’t react or call the police. He went to bed to try and calm the situation down but the violence erupted again Saturday morning.

“There was blood everywhere, she asked me clean it up. Obviously I was in no fit state, so I didn’t do it, and she didn’t like that.

“She got a bottle, smashed it and stabbed me in the neck with it.”

Mark ran out onto a street where a passer-by stayed with him and insisted he go to the hospital.

When police found him they said he was so traumatised he did not realise how badly injured he was. They said he could have died.

“I had a shattered eye socket, and had to have a metal plate fitted. I had four or five deep cuts in my heads which now have stitches and staples.”

He lied to the officers about what had happened and said he avoided speaking to them about the violence he was suffering.

“In a way I was worried about coming forward, about it getting out, what people would think Oh he’s been beaten up by a woman’.

“In a way I loved her. I just wanted to sort it out and move on.”

In the end he told the police what was happening.

“Looking back on it now I’m glad police got involved.

In October, Gemma Hollings was found guilty of causing grievous bodily harm and assault after a five-day trial at Preston Crown Court.

Looking back Mark explains why he didn’t defend himself.

“I get asked that question a lot. Why didn’t I hit her back? I just didn’t. I don’t hit girls. I’m not like that.”

Although the number of reported cases for women are much higher at 1.2 million figures from the 2013 Crime Survey suggest around 700,000 victims of domestic violence in 2013 were men.

Mark says: ” Men are probably scared to come forward because they’re scared what people will think. You don’t hear it that often of men but they shouldn’t have to suffer. No one should – men or women.”

The ManKind Initiative is a charity that provides support to male victims.

Mark Brooks is the chairman who tells us one in five people going to police are now men.

“All domestic abuse awareness campaigns and policies must include and give equal status to male victims as female victims. If there are female only campaigns that is ok as long as there are male campaigns as well.”

In the next few months the government is expected to make domestic violence a specific criminal offence and that includes emotional and financial abuse.