Julia Gillard joins Beyondblue: Beyond politics, a calling for a national cause
A surprising decision of the Beyond Blue board to appoint Julia Gillard as the next Chair of this non-profit organisation.Gillard expressed her opinion of men in her attack on Tony Abbott. At the time Jeff Kennett was “scathing of the then prime minister’s so-called misogyny speech in which she famously launched a parliamentary attack on the alleged sexism of Abbott, then opposition leader. Kennett said: “In recent times I think Ms Gillard’s accusation of Mr Abbott being a misogynist was probably the worst thing I have heard in adult life and my interest in politics, because it was profoundly wrong.”

And now Gillard will head up Beyond Blue!!

The unutterably grim and shameful history of Adelaide’s Glenside psychiatric hospital pretty much charts our changing attitude to the mentally unwell. Beginning life as the Public Colonial Lunatic Asylum in 1846, it served to keep from sight a variety of mentally and physically sick adults — society’s discards.

It didn’t call itself a sanatorium or a facility. There was no ­euphemism to guard against the disagreeable realities of what went on there.

Segregated from the outside world were dementia sufferers, the dying, the undiagnosably ill, those suffering tuberculosis and syphilis, and unmarried women and their children alongside the criminally insane who would be unchained and sent back to jail from time to time when Glenside became overcrowded.

As a girl, Julia Gillard and her sister would play behind Glenside’s still brooding stone walls with its early 1970s residents. The girls’ dad, who had brought the family to Adelaide from Wales in 1966, trained in South Australia to become a psychiatric nurse and worked there.

By then Glenside had changed and the days of subduing the inmates’ behaviour with chloral hydrate and insulin shock treatment were long over but, as an indication of how far we still had to go, the Gillard girls’ playmates included Down syndrome kids routinely institutionalised with the various adults.

“That was our life, you know,” the former prime minister said this week. “It was what Dad did for a job. It wasn’t this big, unspoken about (thing). I had a different perspective on it.”

And it was that perspective, and Gillard’s championing of the National Disability Insurance Scheme, that set former Victorian premier Jeff Kennett on a three-year campaign to bring Gillard on to the board of his anti-depression initiative Beyondblue and ultim­ately persuade her to take over from him. 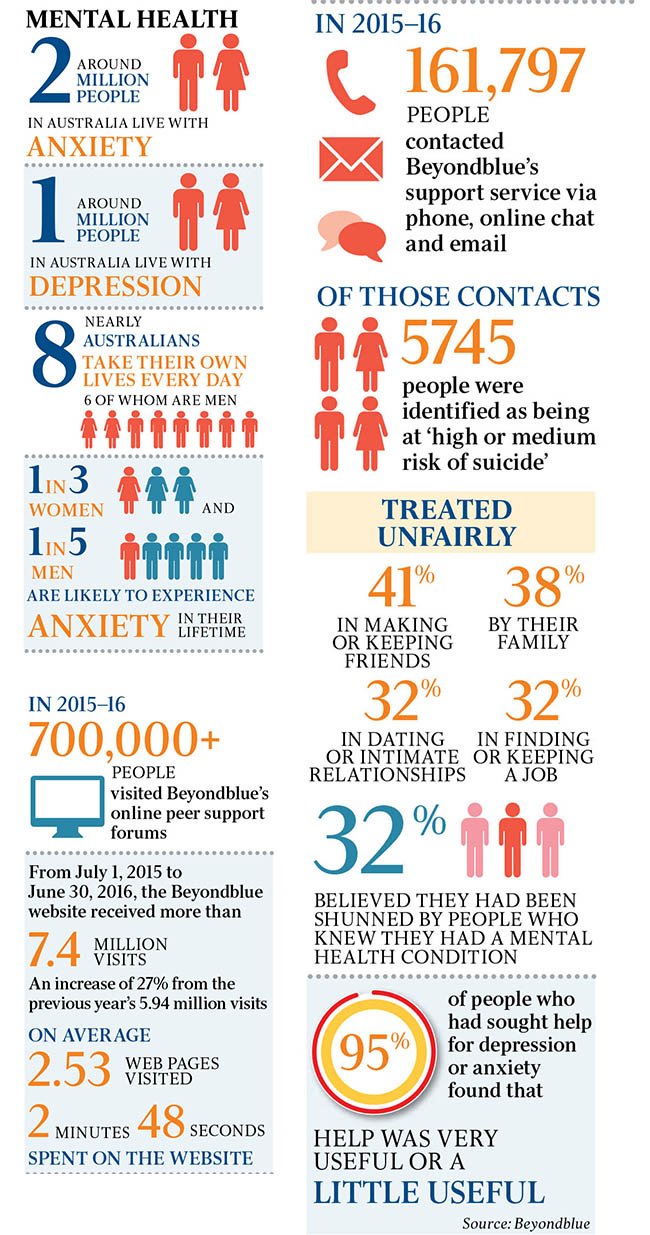 Kennett knows it is a controversial appointment and will stay on until the end of June “to bat for our selection”.

“Julia knows she’ll get some battering and bruising,” he says.

He called Malcolm Turnbull and Health Minister Greg Hunt with news of the Beyondblue board’s choice of chairwoman and describes their reaction as one of “surprise … surprise”.

“And I think a lot of people will be surprised, but that is the wonder of Beyondblue; it’s not owned by anyone. It’s not owned by a political party. We’ve always been bipartisan. It is here only to serve.”

Beyondblue, with Kennett at the helm, has served with distinction for more than 17 years.

The statistics of its success reflect the often little known rates of depression and suicide in Australia: our incidence of suicide is double the road toll; at least eight Australians will kill themselves today; half of all Australians will experience depression and/or anxiety in their lives; Aboriginal and Torres Strait Islanders are twice as likely to take their own lives.

Of the 161,797 people who contacted Beyondblue last year to seek advice, 90 per cent were dealt with by fully trained psychologists and psychiatrists as part of a service that runs around the clock.

Many sought help from the chairman himself. And that is one of the reasons he feels the need to hand over the reins.

Not only will strangers unburden themselves on the street when they see Kennett, who turned 69 this month, but his mobile number has long been a poorly kept secret.

“But most of my time is spent with people ringing me up looking for help. Most of these are people I don’t know.”

They are usually desperate. A family member — on a rare occasion, more than one — has ­attempted suicide and they don’t know where to seek help. Kennett always warns them he is not a professional but does a little research on the run as “a fairly well-educated lay person”.

“And I have a little blue book that has psychiatrists and psychologists around the country I ring when people ring,” he says. These are busy men and women with appointments booked months in advance. Not one has baulked at Kennett’s urgent call for help.

“That’s one of the reasons I’m getting out. You’ve got to get a bit of balance back into your own life,” he says. “(These calls) have been taking more and more of my time and the only way to stop it is to get out. I might have five or six a week and it could be 10 or 12 hours’ work. It’s not the time that worries me — you’re drained at the end of it.”

One of the calls a few years ago was from an old Liberal Party colleague, former federal trade minister Andrew Robb.

“When Andrew rang me I was in Tasmania in the highlands with the Hawthorn Football Club,” Kennett says. “I said, ‘Andrew, you’re breaking up, I’ll ring you when I get back to Launceston.’ ”

Robb had told no one, but since adolescence he had suffered from debilitating depression, but with curious symptoms he did not recognise.

“I rang him back and I asked him to explain his illness to me,” Kennett says. “And then I rang a person I know who I rely on and I said: ‘This is what this guy’s explained, is there someone in the psychiatry world who treats this sort of illness?’ So I rang professor John Tiller. ‘John, would you see him?’ Yes he would.”

They worked out the right medication and Robb returned to serve as a minister.

Gillard, 55, understands that her phone is going to be ringing more regularly, but she believes she is prepared for it. “But I will be very careful to not pretend I have an expertise I don’t have,” she says.

“I understand people are going to walk up to me when they see me and share life experiences.

“People are often willing to share personal, very intimate things about their life, so I feel like I’ve had those conversations in the past.”

It also will entail Gillard once again having a high profile.

She has seldom been heard from since losing the prime ministership to a born-again Kevin Rudd shortly before the 2013 election landslide that installed Tony Abbott in the Lodge for what proved to be a spell briefer than each of his predecessors’.

“You don’t see me on the news. I don’t engage in any of that commentary. I made a deliberate decision to do that, partly because I thought it was the right thing to do by my Labor colleagues and the people who were still in parliament and not loom over their shoulder. But also because the status of being a former PM is a very special one, and one of the best things you can do with it is lend your voice and support to causes that are incredibly important and no more important than Beyondblue.

“I understand there will be a bit of hurly-burly (about her appointment). That is inevitable, but I am no longer a domestic political commentator. It is three years since I left the parliament.”

Gillard has been flying beneath the radar while busily flying around the globe as a distinguished fellow at Washington’s Brookings Institution, chairwoman of the Global Partnership for Education, patron of the Campaign for Female Education, an honorary professor at the University of Adelaide, while sitting on the board of governors of the Committee for Economic Development of Australia and Beyondblue.

Kennett and Gillard have not always seen eye-to-eye. Little more than a year before he emotionally announced Gillard had accepted his invitation to join his not-for-profit board, Kennett was scathing of the then prime minister’s so-called misogyny speech in which she famously launched a parliamentary attack on the alleged sexism of Abbott, then opposition leader.

Kennett said: “In recent times I think Ms Gillard’s accusation of Mr Abbott being a misogynist was probably the worst thing I have heard in adult life and my interest in politics, because it was profoundly wrong.”

Gillard was “not a leader of substance” and had gone on the attack because of her “insecurities and failures”. She should step down, he said.

“Well, I guess, like everything else, with the passage of time, if you don’t learn every day …,” he says, appearing to search for an adequate explanation of his speedy retreat. “Look, we’ve all said and done things in the heat of the ­moment, but the great beauty about life, if you appreciate the gift of living and life itself, you don’t carry one thing from today to tomorrow … what I said yesterday is irrelevant to me.”

In her maiden speech to the federal parliament, Gillard did not miss her then state Victorian rival when discussing her local area. “When the Victorian premier turns to the west he holds his nose and closes his eyes,” she said.

“Dad wasn’t much of a fan of Jeff when Jeff was premier,” Gillard says.

These days they can hardly resist giving each other robust character assessments, almost as if they were changed people.

“We get on well,” says Gillard. “But we are very different people. I am not the new Jeff Kennett.”

But like Kennett she will be paid modestly for the demanding role: about $45,000 a year.

Gillard becomes the first former prime minister to head a not-for-profit since Malcolm Fraser formed Care Australia in 1987 and later served as president of Care International.

Kennett is mystified why more former prime ministers have not lent their energy and expertise to the sector.

“I think it is very disappointing,” he says.

“If you’ve been fortunate enough to serve at the highest level in a state or a country, you owe something back to society. I can’t answer for them, but it is why I am very pleased and proud Julia has taken this on.”

But gardening is not on the cards for Kennett now he is stepping back from Beyondblue: “Do not retire. Retirement actually kills you.”